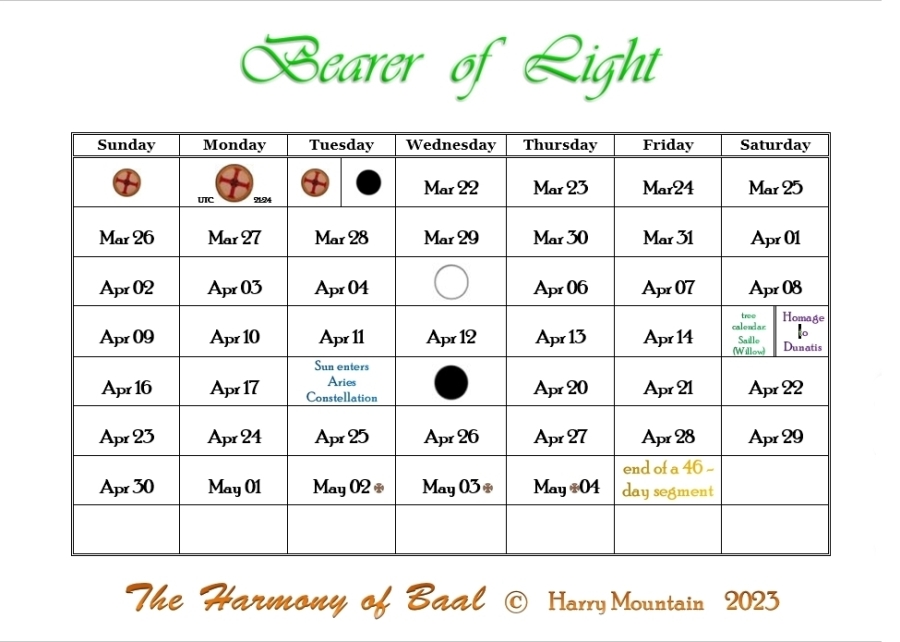 The spring equinox was a 3-day solar event to honour the young son god when he became strong enough to overwhelm darkness.  It was also a time when the ancient people paid their respects to his mother the moon goddess, to purify the land, to celebration the emergences of the earth goddesses from their winter sleep and to begin a new cycle of events.  Furze fires were lit on hilltops in honour of fertility goddesses such as On-niona.

During this event night and day were in balance, it was the beginning of the bright half of the year.  The festival takes place during the time of Pisces in the sun zodiac calendar.  The day was also in the month of Alder (hottest-burning) in the tree calendar.  The Great Mother (Triple Goddess) visited her admirers first as the hag, dressed in black and representing physical death.  It was a day of sacrifice, first by the druids, then by everyone.

During the second day The Great Mother appeared as, a youth wearing white, signifying intellectual birth.  On this day (spring equinox) everyone visited the mother cave (unicursal maze) representing the womb of the earth goddess and asked for the return of the male oak spirit from its winter abode in the female mistletoe.

On the third day of the festival, the Triple Goddess appeared as a maiden in the prime of her life and dressed in scarlet: the color of the spirit, fire and sexual energy.  The young goddess attended a day of feasting, drinking (mulberry wine), chariot races, games of skill and story telling.

All three days of the event were enhanced by dance, song, music and decoration by any new growth of leaves or flowers.  The Great Mother was the perpetual virgin, mother of all Celtic deities, mankind and all living things.  She was associated with the moon, fertility and continual motion.

>return to The Harmony of Baal<